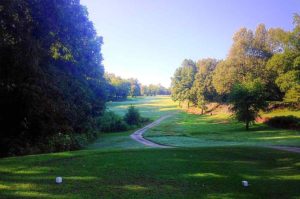 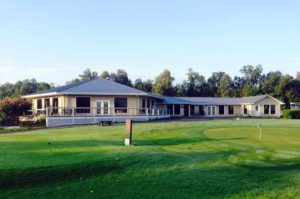 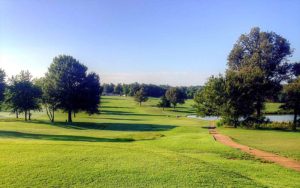 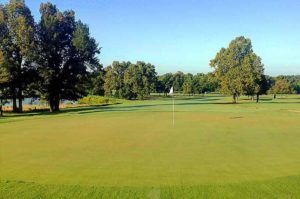 The Corn Growers were having their annual golf tournament but John Barge, the PGA pro, was nice enough to let me get a round in before their shotgun start. Hidden Trails Country Club in Dexter, Missouri is an excellent rural Missouri golf course. The course is located a couple of miles from Dexter which is midway between Sikeston (home of the throwed rolls) and Poplar Bluff. They have a couple of grasses on which I have never played: Mini Verde on the greens – which were very fast, but held reasonably well, and Latitude 36 Bermuda on the fairways. This Bermuda strain is now also being used on football fields so it has to be hearty, thick and tough. The course is long with a lot of hills, small greens, mature trees, a few sand traps and very narrow fairways/openings is certain areas. This is a fairly tough course which I would like to play again. Their superintendent, James Burrows, came from Texas and Tiffany Springs in Kansas City, which he rates high.